Home :: Here are the companies that have filed the highest number blockchain patents

As faith in blockchain technology continues to grow, many world renowned companies are considering new uses for it. Here are the companies that to date have filed the largest number of blockchain patents.

Why are companies filing for blockchain related patents?

It seems that more and more high-profile companies are coming to the same conclusion. Blockchain technology can revolutionize the world’s economy. The surge of interest in cryptocurrencies is one way in which we can measure people’s trust in the technology. Another is by looking at the measures taken by large companies to prepare for a future that puts the blockcain central stage.

Essentially, it is a public database, safe from outside influences, that records transactions made through it. It can have numerous uses. A blockchain is the central technology that helps cryptocurrencies function. The technology itself can be used in a variety of areas including, but not limited to: capital transactions, identity verification, storage of medical records etc.

The biggest companies working with the innovative technology

Chinese tech company Alibaba currently hold the distinction of having filed the highest number of patents involving blockchain. They have filed an impressive 90 such patents, 10% of all applications

Elsewhere, IBM  have applied for 89 patents. The company has shown an increased interest in areas that they believe can benefit from the introduction of the innovative technology. Back in July it was reported that IBM had struck a $740 Million deal with the Australian government because they hope this will help bring “more self-service, automation and digitization to Australia’s government services,” was said in an official government statement. 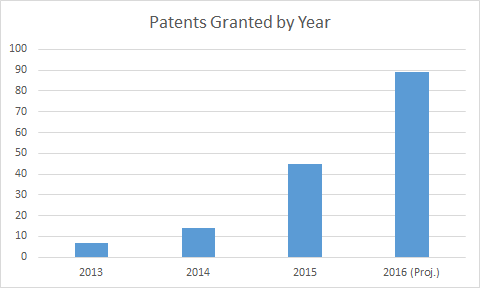 Certainly Alibaba and IBM aren’t the only companies looking to harness the potential of blockchain technology. Companies such as Mastercard, as well as financial institutions such as Bank of America and the People’s Bank of China are conducting their own research in the matter. As a result they are filing for their own patents.

What is this saying about blockchain technology?

First and foremost the increased interest signifies a growing assurance in the potential of this technology. It is no longer a fringe science. Companies recognize the need to explore and understand this field.

Besides, it also means that the interest was not exclusively the result of periods of great growth in value for cryptocurrencies. Prices naturally fluctuate, but users are confident blockchain technology is here to stay and will ultimately have beneficial results.

Furthermore, big companies and individuals alike are recognizing the potential of blockchain technology. They are anxious to use it to help improve their daily activities. Not least importantly, companies fear that if they do not act now, they will be left behind of a future that will include the blockchain.